Delta, Colorado, June 1, 2022 — USDA Forest Service Law Enforcement & Investigations (LE&I), with the assistance of the Ouray County Sheriff’s Office, are actively investigating the cause of the Simms Fire. At this point in the investigation, investigators have determined that the source of the ignition of the Simms Fire was the Simms Mesa Prescribed Fire Project conducted on May 16, 2022. Fire investigators are still identifying and contacting potential witnesses to ensure all relevant information is obtained.

On May 19, the forest was actively monitoring the 188-acre project area when smoke was reported. Interagency first responders immediately engaged in initial attack that afternoon and worked through the night to slow the fire’s spread using dozer and handlines, air resources, and structure protection measures. Ultimately, 313 acres burned, with three structures lost. Assertive initial attack efforts combined with favorable precipitation and cooler temperatures the following days, allowed fire managers to fully contain the Simms Fire on May 23.
The Simms Mesa Prescribed Fire was implemented according to burn plans and state air quality permits. Favorable weather conditions and forecasts received by the National Weather Service, fuel moisture content, adequate personnel and contingency resources were within the parameters of the plan. Fire behavior was favorable on the day of the burn and met the objectives outlined in the plan. Firefighters patrolling the area reported that control lines were holding, interior areas weren’t showing significant smoke or heat, and no hot spot fires were detected outside of the control lines. A wind event four days later caused the Simms Mesa Prescribed Fire to escape containment lines and it was then declared a wildfire.

“Every management action on the Grand Mesa, Uncompahgre, and Gunnison National Forests is intended to promote forest health and a landscape that is more resilient to drought, insects, and disease,” said Chad Stewart, Forest Supervisor for the Grand Mesa, Uncompahgre, and Gunnison (GMUG) National Forests. “Our efforts unfortunately resulted in an undesirable outcome, despite the careful, detailed planning by experienced resource professionals. My heart goes out to those who have been deeply impacted by the Simms Fire.”
The Rocky Mountain Regional Office, working with the GMUG Forest Supervisor has initiated a Facilitated Learning Analysis and Review (FLA) to foster organizational learning from this unexpected outcome. The team will have members from within the USFS, the Colorado Fire Prevention and Control and the Bureau of Land Management as well as a local elected representative from that area.
“The Facilitated Learning Analysis will help the Forest Service fully understand what happened on the Simms Mesa Prescribed Fire,” said Frank Beum, Regional Forester for the Rocky Mountain Region. “We will use this review to best inform future planning for wildfire mitigation efforts, always with safety as the primary objective.”

Forest Service Chief Randy Moore announced a pause in the use of prescribed fire on National Forest System lands on May 20. This temporary pause will help the Forest Service focus a review on the prescribed burn program nationwide to ensure it is anchored in the most contemporary science, policies, practices and decision-making processes, and that employees, partners and communities have the support and the resources they need to continue using this critical tool to confront the wildfire crisis. 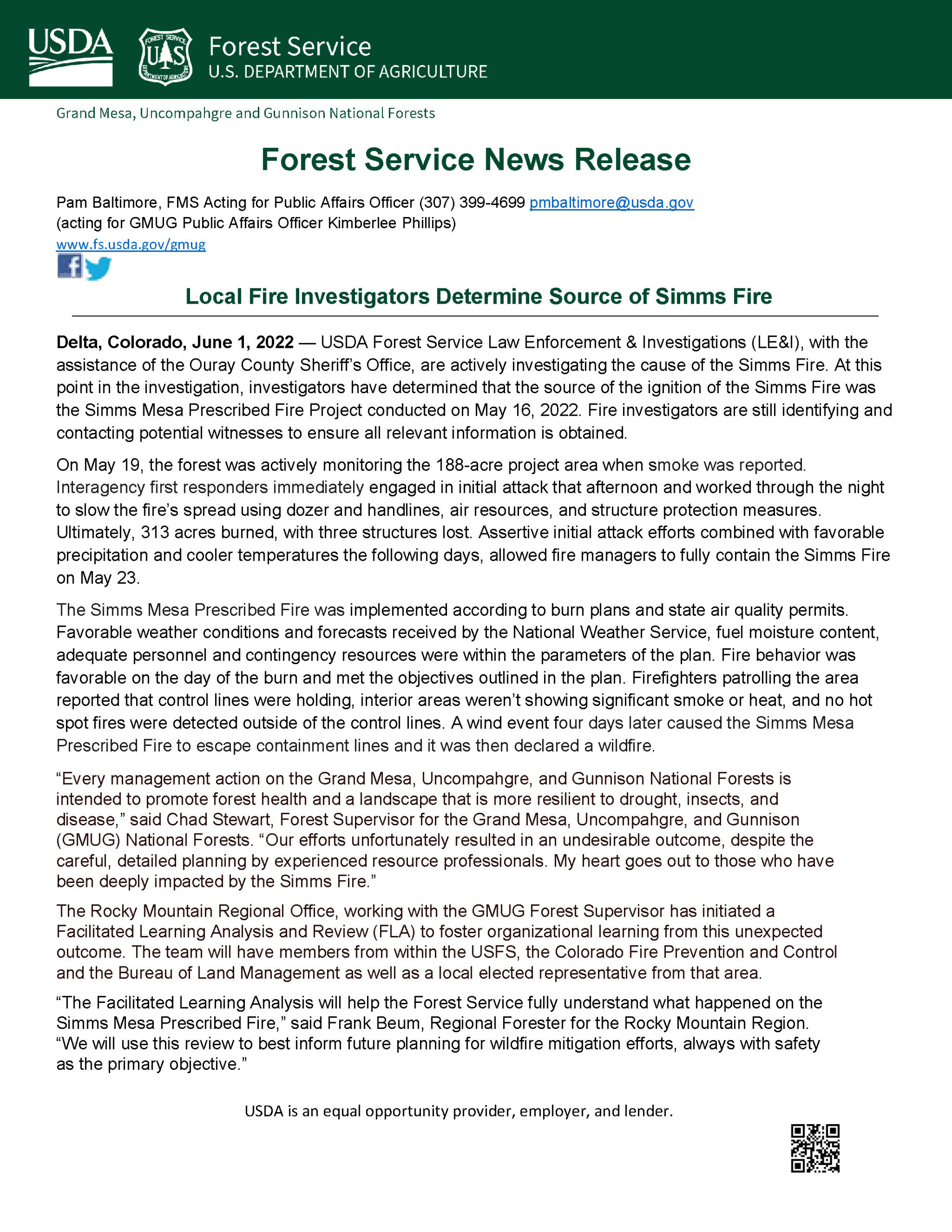 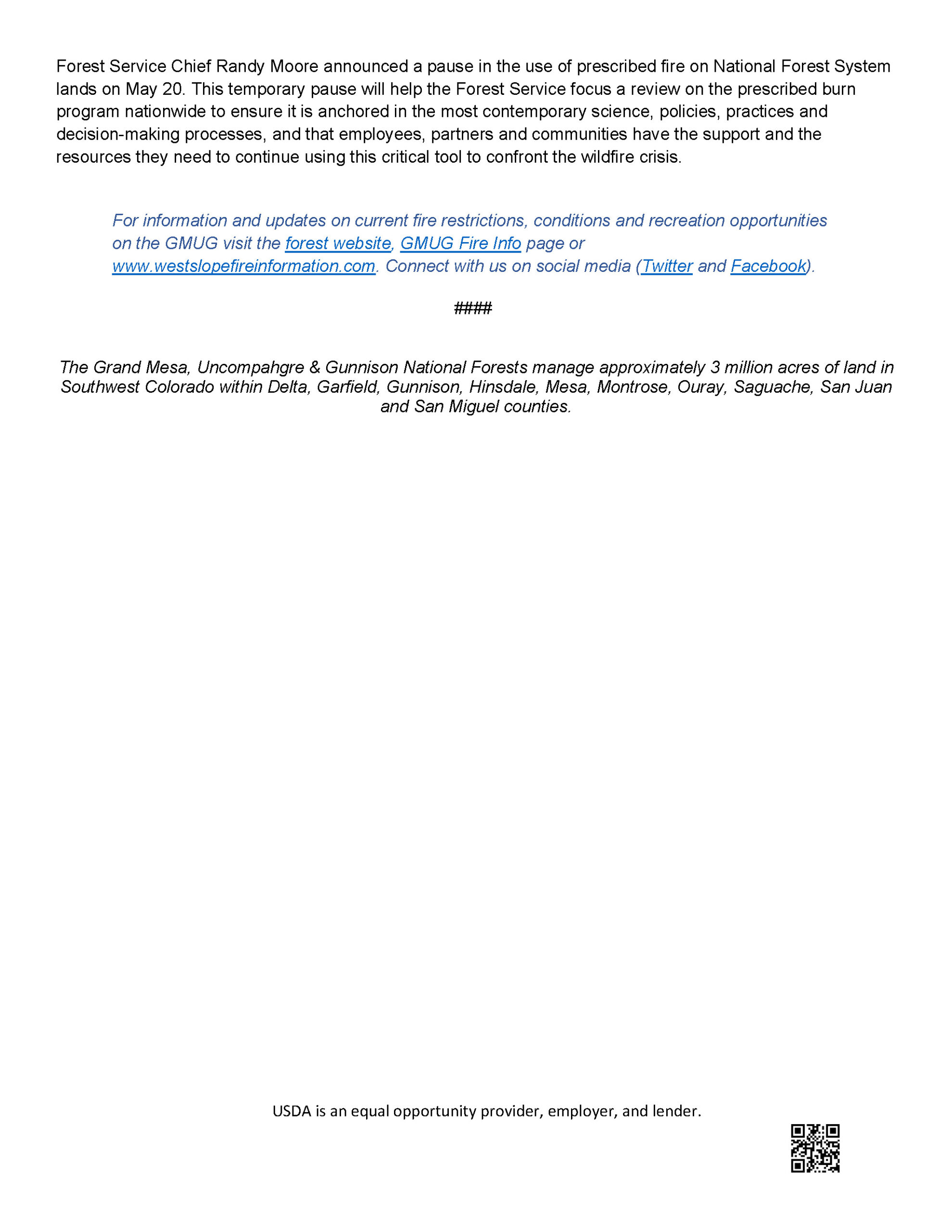