Update 8:20am 6/21: The Upper Mailbox Fire is 100% contained. The Type 3 IMT transferred command back to the local BLM unit this morning. Crews will continue to monitor and patrol the fire. This will be the last update unless significant activity occurs.

Update 9:30pm 6/19: The Upper Mailbox Fire is now 50% contained and remains at 474 acres. Crews are still working to secure the perimeter and begin mop-up.

Update 8:30pm 6/17: Containment has increased to 35 percent today. Fire crews are working to secure the perimeter by completing control lines and extinguishing any smoldering fuels along the fire’s edge. No additional fire growth occurred and the size remains at 474 acres. Pre-evacuation notices to nearby residences were lifted at 8:00 p.m. today. Additionally, the temporarily closed BLM campgrounds near the fire will be open for public re-entry at 6:00 a.m. tomorrow. Please avoid the immediate fire area as safety hazards remain and firefighting operations are continuing.

Update 2:30pm 6/17: The fire is still at 474 acres and 20 percent containment. We expect new numbers this evening. Thank you for your patience as the team works hard to take care of business! Click here to see Check out this awesome aerial footage of the#UpperMailboxFire from the Colorado Division of Fire Prevention and Control’s multi-mission aircraft. The flight was yesterday at 10:00. To learn more about the aircraft: https://www.colorado.gov/pacific/dfpc/multi-mission-aircraft-mma

Update 9:15am 6/17: Precipitation in the fire area has made access difficult on unpaved roads. Crews will be working on the fire as soon as they can safely do so.

Update 8:10pm 6/16 : Upper Mailbox Fire is 20 percent contained. Cooler temperatures, higher humidity and precipitation over the fire contributed to the containment efforts. Minimal fire growth today and the size remains at 474 acres. The Type 3 Incident Management Team is in place and will officially assume command of the fire tomorrow.

Update 8:30am 6/16 Update 6/16/17 @ 0830: Size estimate is ~400 acres. 4 confirmed spot fires across (north) of the San Miguel River w/resources on scene making good progress on getting line around them. Reconnaissance flight planned this morning to gather more accurate perimeter/size information. Type 3 Incident Management Team is planned to take command of fire later today. This map shows the fire’s perimeter based on yesterday afternoon’s reconnaissance flight. DFPC is planned to conduct another flight this morning and updated maps will follow shortly thereafter. 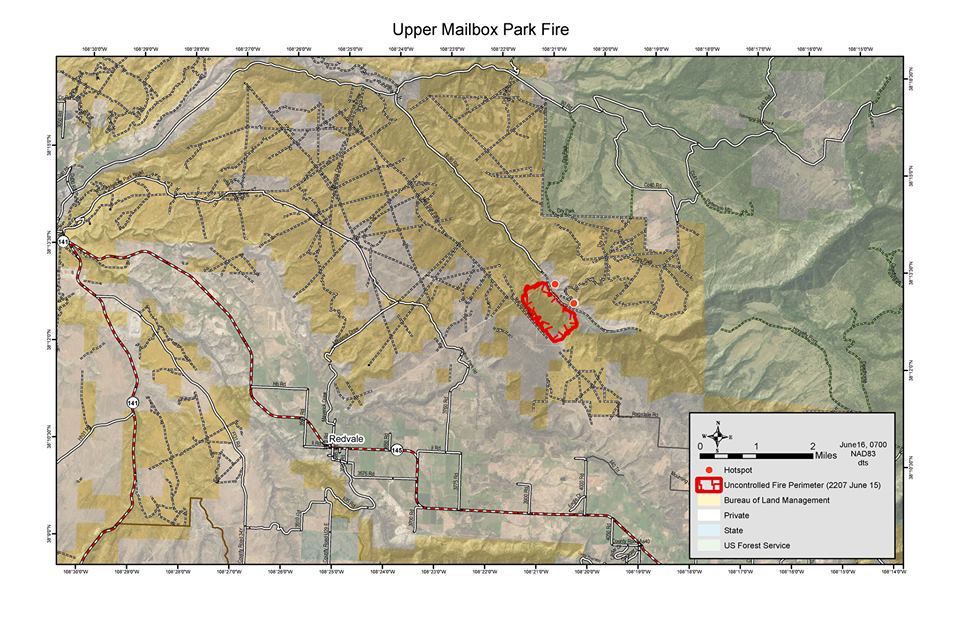 Final update for the night of #UpperMailboxFire: The Incident Command Post (ICP) is standing guard and working on strategy. Operations will continue throughout the night. The pre-evacuation order for Ragsdale Road is still in place. Changes to that will be announced here.

The BLM – Southwest Colorado Fire and Aviation Management Unit released earlier today that the state’s multi-mission aircraft estimated the fire at 262 acres with no estimate for containment. The fire is northeast of Redvale in the west end of Montrose County. The terrain is pinyon-juniper with elevation variations.

We know that the public is very concerned and we will do our best to update as soon as we have more information. Thank you to our friends at San Miguel County Sheriff for the great photos and operations support, Norwood Fire Protection District, Colorado Division of Fire Prevention and Control, Montrose County Sheriff’s Posse, BLM, Nucla-Naturita Fire Protection and EMS, the many hand crews, hotshots and others we may have not listed that are working around the clock to contain this fire.

Update: BLM resources are on scene, aircraft over the fire updated size to 15 acres.

There is a new fire start north of Norwood, smoke visible from San Miguel County, however at this time, fire is in Montrose County probably on Bureau of Land Management (BLM) land. Upper Mailbox Fire reported north east of Redvale, CO burning in pinyon-juniper. Multiple resources en route. Information will be updated as it becomes available.